Nine Lessons We Learned from Being a Host Family

The summer of 2015 will be remembered in the Snell household as the “Summer of Shai.” It was the summer we welcomed an Israeli shaliach into our home for three months while he worked as a counselor at J-Camp, and when we discovered that “host family” is less about being hosts than it is about being family. Here are some of the other important lessons we learned:

1. It’s okay to miss home. Shai had an incredible summer in California. He made close friends among the other counselors at J-Camp and looked forward to spending his days 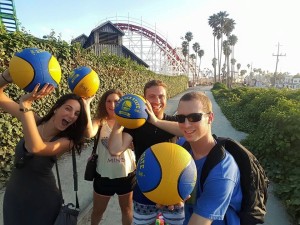 with the campers. But living in a foreign country is, frankly, foreign. It’s natural to miss home even in the midst of a great adventure. I admired the effort he made to put on a smile when those times hit, but I admired him even more for having the courage to admit when he was homesick.

2. Sports are nearly universal. Shai arrived in California overjoyed that his favorite sports team, our local Golden State Warriors, were on their way to the NBA finals. We taught him about StubHub, and his splurge on a ticket to one of the games became one of the highlights of his summer.

But as much as the other members of the Snell household were pulling for the Warriors, Shai was stymied to hear that basketball is not our favored spectator sport. On his first day in our home, Shai asked us what we liked to do in the evenings. My husband responded, “Mostly we 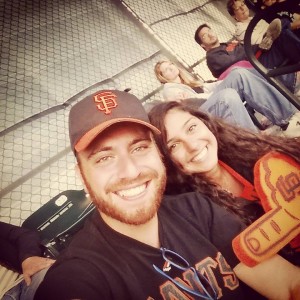 watch Giants games,” which drew a look of disappointment. But our guest was willing to learn and asked many questions about this confusing American game with which we were so obsessed. By the end of the summer, Shai was clad in orange and black and scouring StubHub again, this time to squeeze in one last Giants game (his third) before departing.

3. But food isn’t. Shai was excited about hamburgers and deep-dish pizza, mistrustful of grilled vegetables and enthusiastic about my teriyaki-pineapple chicken. He was downright puzzled that I answered his query, “Where do you keep the smoked salmon?” with, “um, the supermarket, I guess!” But the thing that made him smile the most was cooking his own favorite dishes for us: schnitzel and falafel.

One morning as we were preparing to leave for the JCC, I watched Shai place forkfuls of canned salmon onto a roll then spread a generous helping of peanut butter over the top. I was moderately appalled, but thought to myself, “Well, he likes tuna on pizza, and we wouldn’t eat that. I guess his tastes are just really different from ours.” Later that evening, though, I couldn’t resist asking how he had enjoyed his lunch.

“It was so disgusting! I threw it away!”

“I thought it was…unusual…of you to combine peanut butter and salmon.”

“Someone in Israel told me Americans put peanut butter on everything, so I thought it must work. He was so wrong.”

4. Forty-something-year-old white men can’t jump. Nor can they keep up with a 21-year-old on the court, but my husband and his buddies gave it their best shot every opportunity they got. Shai was an equal-opportunity dominator on our driveway basketball court.

5. Host families aren’t exclusively human. Shai immediately bonded with our German Shepherd, Koda, who was thrilled to have another young man in the house to throw frisbees and balls for her. On his final night, Shai apologized for disrupting our sons’ chore rotation when requesting to feed her one last time.

6. Oh, we LOOOOOOVE it!!! J-Campers all know Shai’s signature line, repeated excitedly whenever he lead morning Chavurah. But Shai’s enthusiasm wasn’t limited to camp. The list of things he loved here also included:

7. Life elsewhere really is different. Our teenage sons were fascinated by the cultural differences when Shai would talk about his life in Israel. The most startling for them was the concept that this young man, only a half dozen years older than one of them, had been fighting in a war six months previously. 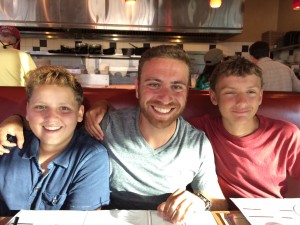 He was as open about his love for the country he served as he was his grief for a friend lost in the Gaza fighting last winter. Both were important lessons for my sons.

8. But moms everywhere are the same. Every time I communicated with Shai’s mother on Facebook and Skype, the underlying message was the same—she missed her son and needed the reassurance of knowing that another mom was watching over him. (… and, yes, he’s eating right … and he’s being helpful and polite … and he’s doing a great job at camp … and he’s happy here…) 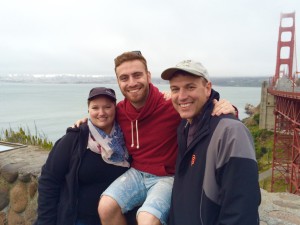 he was spending some time before heading back to Israel. “I miss everyone at the JCC so much!” he said, “I’m coming back tomorrow just for a visit.” It’s a painful truth that anyone who embarks on this kind of adventure comes to learn: Once you open your heart to a new place and new people, they become your own; you may become torn between the place you come from and the place you briefly called home. Shai will always feel connected to the OFJCC, and we who signed up to be hosts and in the end became family will miss him equally.

Learn more about hosting an international camp staff member in your home.