“It depends how you look at it.” Q&A with Shai Atanelov, J-Camp Counselor

J-Camp Counselor Shai Atanelov describes how a journey of martial arts led him to an unexpected destination: his personal philosophy.

All journeys have secret destinations of which the traveler is unaware.” –Martin Buber

Where will your journey take you?

Oshman Family Jewish Community Center (OFJCC): What brought you to the OFJCC?

OFJCC: What made you want to be a counselor in a summer camp?
SA: When you work with kids, you get the chance to be fun and goofy. But you also help them learn values from you.

OFJCC: What do you hope your camp kids will learn from you?

SA: I hope they will remember two things: one, to always be happy, and two, be a good person by making the world a better place.

OFJCC: Have any of your campers made the world a better place since they met you?

SA: When I see them doing things like helping their friends close their backpacks or pick up trash from the floor. It starts with the small things.

OFJCC: What was a journey you took that ended up having a “secret destination”? 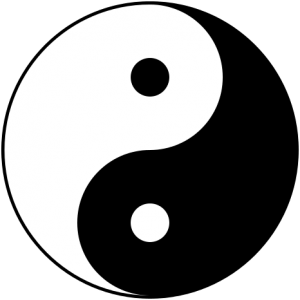 SA: I am pretty into martial arts. I started learning karate at the age of seven and Krav Maga (an Israeli self-defense system) at 16. It was because of this that I discovered the concept of yin and yang. Do you know yin and yang? The circle is divided in two halves. There is a black half and a white half. And there is a tiny white dot in the black half and a tiny black dot in the white half. I asked my Krav Maga teacher what it meant. He told me the ying and yang says that in every good thing, there is a little bad, and vice versa. But they don’t work against each other—they complement each other.  And it’s up to you to decide how you are going to look at it. Ever since then, that has been my motto.

SA: I believe that if you want to make your life better, it depends on how you are going to look at it. It is up to you to make a difference.

OFJCC: How has this “secret destination” been part of your journey at the Oshman Family JCC?
SA: The best thing about the OFJCC is the diversity. That’s what I like about J-Camp. Even though it is a camp at a Jewish Community Center, it doesn’t mean you have to be Jewish. The fact that there are people from different ethnicities and everywhere around the world is very important. Jews live among Arabs, right-wing among left-wing, religious and not religious. We have a lot of groups. I like the fact that [the OFJCC] is one place that connects all kinds of people no matter what your religion or what you believe in.

I also appreciate the diversity of the Bay Area. The values accept everyone here.  It really connects with what I believe in, to accept and value people and make the world a better place to live in.

OFJCC: Anything else you like about the Bay Area?
SA: I think I am one of the few Israelis who understands the game of baseball and actually likes this sport. My host family last year taught me the rules. I am a Giants fan, that’s for sure.