Israel Trip: A People with a Religion, and Jeep Rides and Chocolate-Making Workshops…

The Sea of Galilee viewed from the west

Greetings from Israel, where we’re kicking off the first-ever OFJCC Silicon Valley Community Israel Trip.  Our journey began with a rousing speech by former Hillel International President Avraham Infeld, in which he forcefully declared, “Judaism is not a religion!  We are a people WITH a religion!”  He said he was taught this by his father, who was fond of saying, “Thank G-d, I’m an atheist.”

Infeld, who wears a kippah, keeps Shabbat, keeps Kosher and prays three times a day, then told us of meeting the CEO of the Baltimore JCC years ago, who said he did not keep Shabbat, did not keep Kosher and never went to shul, but he insisted that Judaism IS a religion.  And that, Infeld said, is why we Jews are so meshuga!

Our trip started on the bustling streets of Tel Aviv, where we experienced culinary delights on every corner, bargained in the outdoor artist market Nahalat Binyamin and explored the narrow alleyways of the artist colony Neve Tzedek.

From Tel Aviv, we traveled to the high-tech commuter town of Zikhron Ya’akov, our sister community, where 300 smiling children serenaded us, we engaged with the locals, and had a catered lunch at the local pub called The Hobbit.  Some of us followed that stop with a trip to a Druze village where we dove in with both hands, helping cook some Druze cuisine–and then enjoying the fruits of our labor; while others went for a crash course on the Israeli high-tech sector.

This morning, we awoke to the sun rising above the hills over the Sea of Galilee at Kibbutz Ginosar.  After a huge breakfast, we journeyed to the north, some of us going on a jeep ride among the army bases and tanks along the Golan Heights, and others rafting on the mighty Jordan River.  Though with the poor rainfall this year, “mighty” is quite an overstatement.  After working up an appetite from our outdoor adventures, we ate lunch at a local kibbutz and then split up for more eating: some of us made (and ate) chocolate at De Karina, and others tasted Golani wine at Pelter Winery. 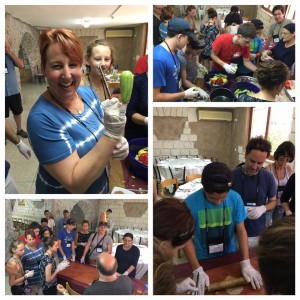 So far, this trip has been a great mix: 25% culinary exploration, 25% outdoor adventure, 25% political discussion, 25% making new friends, and 100% fun.  The next part of our trip promises some real spiritual opportunities as we head to Masada, the Dead Sea and Jerusalem.  Now we are on our way to dinner at a gourmet restaurant, Decks, right on the Sea of Galilee.  The sun is setting over my shoulder, turning the fields gold, and I’m looking forward to tomorrow’s adventures.