A Community Hug: A JResponse Trip to Pittsburgh

This December, Robin Vasilakos, the manager of the Center for Social Impact at the Oshman Family JCC and Stephanie Levin, chief engagement and innovation officer of the Peninsula JCC, traveled to Pittsburgh as part of the JCCA JResponse program. They were there to provide support to the JCC of Greater Pittsburgh in the wake of the horrible shooting at the Tree of Life synagogue that took 11 lives. Here, Robin shares her impressions and how you can help.

I knew we would be welcomed by the community, but I didn’t realize how much. When the Pittsburgh community members were telling us about how much our being there meant to them, it brought them to tears more than once. They just needed what I call a “community hug.” From our community to theirs, we were there to show love and support. Everywhere we went, when people saw us in our JResponse blue shirts, they would stop us and say “Thank you for being here.”

During the first three weeks after the incident, the staff of the JCC of Greater Pittsburgh dropped everything to provide logistical, crisis and emotional support to the community. Even the CEO Brian Schreiber, who had been planning to participate in training and ultimately take a sabbatical during that time, stayed on. Staff was very impacted by the shooting – one Pittsburgh JCC employee lost her spouse. The JCC became a central hub for crisis response and they focused on taking care of the community instead of their regular duties. We came in to be able give breaks to staff who worked long hours to support their community. For example, the Aquatics manager needed to be able to take time off. There was an aquatics manager from another JCC who was able to take over some of her duties.

I represented the Bay Area JCCs with Stephanie Levin. It was amazing to get to know her. I feel that we will have that bond for life. Everywhere we went, there were little 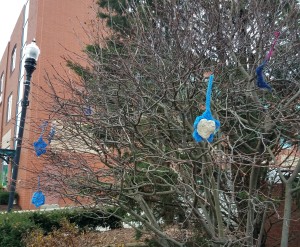 Stars of David hanging from trees in the Squirrel Hill neighborhood of Pittsburgh.