Giving Voice to the Female Role

Opera is not kind to its female characters. Most of them suffer until the bitter end. In their suffering, many female roles are decidedly vocal. In Jewish mythology, a dybbuk is a malicious spirit that possesses the body of a living person until it has accomplished its task. Until recently, S. Ansky’s beloved and tragic tale of the dybbuk focused on Leah, the bride, but gave almost all the words to Hannan, her dearly departed. In Ofer Ben Amots’ contemporary The Dybbuk, a multimedia chamber opera, opening September 24 in Palo Alto at the Oshman Family JCC, the story has been retold from Leah’s point of view. As Ben-Amots remarks in an article from J. the Jewish news Weekly of Northern California, “I decided to do everything from her perspective.”

This is not your typical opera: the classic version has been reinvented with a female lead, one of the leads is played by an instrument, it is much shorter than a classic opera, there is klezmer orchestration and it features a hair-raising score. I am passionate about this production and am thrilled to play Leah, the title role. In this version, Leah has a speaking and singing voice, where in the original play she hardly said anything.

It had a bit to do with the time period of the original play. Hannan, Leah’s betrothed, often spoke for her. In our version, Hannan is instead played by a clarinet, which is a very Jewish voice in orchestrations. When the opportunity arose to do such a unique Jewish opera, with a Jewish composer, performed by amazing Israeli-American Jewish artists, I thought that it was a perfect fit. 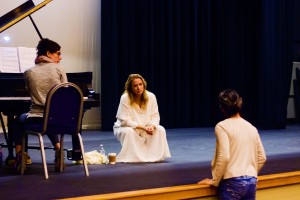 (L to R) Efrat Levy, Ronit Widmann-Levy and Ruth Sigalis in rehearsal for The Dybbuk

The Oshman Family JCC is proud to present the West Coast premiere of this production, which represents a hybrid of genres, backgrounds and locales. The chamber opera fuses musical styles both classical and contemporary, my past and present, and, for the first time, the Old World and the West Coast. Singing this role makes a lot of sense for me as a native of Haifa, Israel who currently resides in the Bay Area. The passion that comes out of this role is unbelievable. Leah feels a lot of passion for her past. But she has to live in the present. This performance represents a unique opportunity for me, the rest of the cast and audience members to do both.

The OFJCC strives to be a platform for Jewish expressions and creativity. The Dybbuk is a perfect example of how Jewish culture embraces an age old musical art form in order to bring to life a classic, almost mythical story of love between two worlds.

Ronit Widmann-Levy is the Director of Arts and Culture at the Oshman Family JCC, where she puts together artistic programming and brings performers from the around the world to perform at the OFJCC. Ronit spent years as a soprano opera vocalist and has sung in opera houses and festivals in San Francisco, Chicago, Washington, Tanglewood, Cincinnati, Kentucky, Berlin, Munich, London, Bangkok, New York, Munich, London and Jerusalem. She lives in the South Bay with her family.