We need to come together talk—to discuss the future of Zionism, the future of Israel’s place in the world, the future of American support for Israel. And we must do so within our own family—including family members with whom we disagree. We must be strong enough to engage with each other from a place of love and respect. 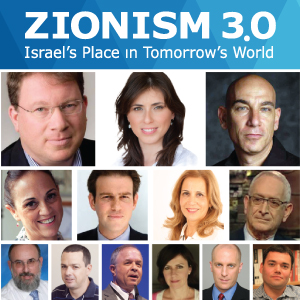 That’s why we are hosting the Zionism 3.0 conference at the Oshman Family JCC on November 22 in partnership with Haaretz.

Why Zionism 3.0? My friend Irwin Kula, President of CLAL, the National Jewish Center for Learning and Leadership, explains it like this: Zionism 1.0 was the operating system from the 1860s until the founding of the modern State of Israel in 1948. Zionism 2.0 began in 1948 and lasted until the early 1990s everywhere in the Jewish world. This form of Zionism was the central narrative around which the American Jewish community was oriented. But now we may be at an in­flection point. We may be at a moment when Zionism 2.0 needs to be replaced by a new vision, a Zionism 3.0. Or maybe it doesn’t. But we need to discuss it.

And where better to explore this idea than in a place that has become known as the epicenter of innovation—Silicon Valley? The Oshman Family JCC in Palo Alto re­spects the entrepreneurial spirit of Silicon Valley and has become an incubator of another sort—an incubator for new expressions of Jewish identity. And central to that identity is exploring and fostering how American Jews relate to Israel and Israelis, including the Israelis next door!

Here in Silicon Valley, we have an Israeli ex-pat community of roughly 40,000. These Israelis are having children who will travel to Israel regularly but may not serve in the IDF; children who will speak Hebrew but may not be able to read Amos Oz in his mother tongue; who will know a Judaism other than Orthodoxy but may not go to synagogue; who will know they’re Jewish but may fall in love with a non-Jew. And that makes them just like other American Jews in this community. How we engage with them about Israel is essential.

Second, the vitality of Diaspora Judaism will always be inextricably linked to the vitality of Israel. So creating a strong bond between American Jews and Israel is of paramount importance—and that is getting more complicated today. How should we respond in moments of crisis in Israel, when bombs are falling from Gaza or when Jews are being knifed in the streets of Jerusalem? How should we prepare our kids to face the new anti-Semitism in their schools: the BDS movement? How should we gird ourselves to support Israel in the face of domestic Israeli political decisions that we don’t agree with?

How do we provide input—and should we provide input—on Israeli policies when we aren’t living there ourselves? How do we teach our American Jewish children to love Israel—and support Israel—despite her imperfections?

The OFJCC is our Jewish community’s living room. It’s a second home where family and friends should come together to discuss the most challenging issues of the day. It’s a safe space where we can be open and honest with each other. It’s a place where those who love Israel can come and discuss what Israel’s place will be in tomorrow’s world, and what role we can have in that destiny.

That’s a discussion worth having. I hope you’ll join us for this conversation.