Surviving and Remaining Human: A “Near Normal Man”

Charlene Stern, the producer and director of the documentary film Near Normal Man, offers lessons learned from her father’s survival of the Holocaust and his message for the next generation.

With decades of details from my father’s life, I’ve learned that the limitless evil that exists in humankind is less critical than our response to it.

A few weeks ago, my father, Ben Stern, at 95 years of age, led a march defying Nazis for the third time in his life as part of the Bay Area Rally against Hatred in Berkeley, California. What words are there to express his feelings on that day?  Yet, he found the words to speak to 7,000 demonstrators as Nazis gathered a few blocks away preparing to rally for nothing less than “ethnic cleansing.”

Learning his story, as the firstborn child of survivors, I would have understood had he been a bitter, angry, untrusting and depressed man.  What I received from my father was the opposite. Why and how did my father found the courage to let go of hatred to become a free man? This became a personal quest at my core. Producing and directing the documentary film, Near Normal Man and bringing it to the world is my response.

My father Ben Stern survived two ghettos, nine concentration camps, two death marches and the destruction of his family. He came to America after the Holocaust. Thirty years later, the Nazis threatened Jews and planned a march in Skokie, Illinois. During his beloved rabbi’s Yom Kippur sermon – as the rabbi told survivors in the packed synagogue to “stay home, close the shades and let them march,” my father jumped up and yelled, “NOT HERE! NOT NOW!”

He sparked the fiercely public battle that stopped the Nazis’ march in 1978.

My father always hated it when I called him a hero. “I’m just human,” he would say.  In 2011, when he shared his life story on the OFJCC Shalhevet high school educational journey in Poland, a large group of Israeli students also visiting Majdanek asked him for a blessing. He was shocked:  “Hell no! I’m no saint!” was his reply.  They sang “Zol Nit Kein Mol” to him instead.

My journey to understanding my father over the decades has finally led me to agree with him that being “human” is his greatest accomplishment.  Choosing to act less than human or sub-human, always starts with a few, then if not checked, grows to the many who give away their humanity as they choose to not think, decide to stand by, remain indifferent to, participate in, benefit by or act as leaders of great evil.

Blessed with energy and chutzpah (like my father), I have accomplished much in my life and career, sometimes with great fear of facing a daunting new challenge.  One time, I remember confiding my fear to my firstborn, Lorie.  She responded; “You’re the bravest woman I know! Just take your fear and use it as fuel.” I did and it works.

Near Normal Man is an unforgettable story of the capacity for one human being to overcome forces that seek to destroy him. It is relevant to young people more than ever—my father’s voice resounds universally, telling us to stand up to hate speech, racism and bigotry in this increasingly dangerous and precipitous time for democracy in our country and the world.

Ben is not the first or only person to have suffered, nor will he be the last. The mystery and wonder of his continued response of courage, kindness and hope, is the most important lesson of my life. My response is defining me as human too.

I invite you to attend and reach out to invite at least one young person to accompany you to the screening event of New Normal Man on October 3 at the Oshman Family Jewish Community Center in Palo Alto.  My father and I will be there.

For more information, go to www.nearnormalman.org. 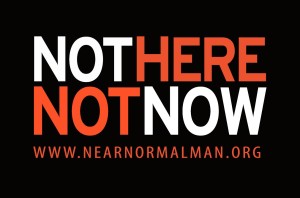 Charlene Y. Stern, Producer/Director of “Near Normal Man” is an accomplished businesswoman. After successful careers at Levi Strauss & Co. and Wells Fargo Bank, she founded her own company and led multiple strategy and creative teams for hundreds of businesses worldwide, to achieve exceptional results.