Construction to Begin on Gefilte Fish Pond in Town Square

The pond will be stocked with free-range, cruelty-free organic gefilte fish from the nearby Sacramento River Delta. In time it will become a completely self-sustaining, zero-impact ecosystem, allowing the fish to propagate naturally and drawing its water supply from a 120,000-gallon rainwater collection system to be installed on the roof of the nearby OFJCC Leslie Family Preschool.

Artist’s rendering of the Town Square and pond

“We are eager to bring this expansion of our natural environment right into the middle of our campus where it will attract visitors of every age, from toddling babies to seniors on their way to mahjong,” said OFJCC CEO Zack Bodner.

Bodner predicts that the feature will also appeal to some new avian visitors. “Palo Alto is in the middle of a major migratory bird route, so we are hopefull that the pond will bring to our Town Square a large number of shorebirds who are being displaced as continued development impacts the wetlands along the San Francisco Bay.” 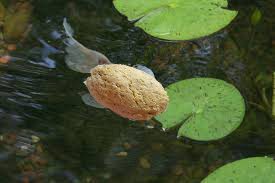 Once the fish mature beyond their productive egg-laying years, they will be humanely harvested according to Kosher dietary laws and offered for sale on campus by local artisinal chef/fishmonger Nathan Pollack.

Pollack is well-known in the area for his creative use of local, seasonal, on-trend ingredients. He plans to poach the OFJCC gefilte fish in a turmeric-matcha broth before wrapping it in holistically-steamed kale and serving it on a bed of chia seeds and quinoa.

“Free-range gefilte fish like the ones that will be raised here at the OFJCC really do have the best flavor,” says Pollack. “I think patrons will be pleasantly surprised at how much of a difference it makes to be able to eat freshly-caught, locally-raised gefilte fish.”

Construction of the pond has been made possible by the generous donation of longtime OFJCC supporters Eta Goldfisch and Ira Karp.