While in the garden at the Oshman Family Jewish Community Center Leslie Family Preschool, the children experience and get to practice many Jewish values pertaining to nature and the environment. In my book Growing Jewish Values: Cultivating Your Jewish Roots in Your Own Backyard, I have emphasized ten values that can be easily performed at school or even at home.

Each month one of these values will be highlighted, demonstrating how OFJCC preschoolers are performing these good deeds or commandments (mitzvot). 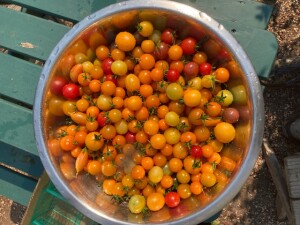 Today we focused on: Hazan et Hakol: Feeding Everyone, Sharing the Bounty. Four children, accompanied by their teachers, came up into the garden to harvest an abundance of cherry tomatoes. While they had all had a chance to explore and taste from the garden before, they knew that, this time, these tomatoes weren’t for them to eat. They were being harvested to be given to people who didn’t have tomatoes and might be extra hungry. They happily picked a big bowl full of golden and red tomatoes.

The tomatoes were delivered to Jewish Family and Children Services in Palo Alto where they were received with much appreciation and gratitude. I was told that these nine baskets of cherry tomatoes, from our gardens, could potentially be distributed to nine families in need of fresh produce.

Over the course of the school year, we hope to regularly donate produce to JFCS, fulfilling this important value: Hazan et Hakol: Feeding Everyone, Sharing the Bounty.

Debbie Togliatti has been a preschool teacher at the OFJCC for 30 years. A former classroom teacher, Debbie recently left the confines of the classroom to become the Garden Pedagogista. All children, from 18 months to 5 years old, get to experience the wonders of the garden with Debbie’s guidance. She serves as a caretaker on a small farm in Los Altos Hills with 16 chickens, two goats and one rabbit and organically grows fruits and vegetables. In 2013, Debbie self-published her book, Growing Jewish Values: Cultivating Your Jewish Roots in Your Own Backyard.