Oasis Play Space: Everything But the Camel

On Sunday, July 17, we opened the floodgates to our new Oasis Play Space on the Jessica Lynn Saal Town Square. After months of planning and construction (and curiosity), our unique and amazing Oasis was opened to the community.

The Play Space, which has been featured in J. The Jewish News Weekly of Northern California, was designed by Scientific Art Studio. The Oasis welcomes families to a creative space that is infused with Jewish spirit and also meant for everyone to enjoy.

Several elements of the Oasis have Jewish significance and also reflect our history as desert wanderers. 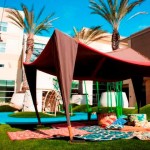 Tent of Abraham and Sarah: Adults and children alike can find refuge under the shaded, sturdy tent. The tent holds special meaning as the Jewish patriarch and matriarch Abraham and Sarah always welcomed guests and strangers to their tents, making them feel at home. 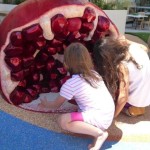 Giant Pomegranate: The interactive pomegranate stimulates imaginative play for children ages six months to two years, but it has a deeper Jewish meaning, too. Pomegranates, a Mediterranean fruit, are considered auspicious for their numerous seeds. Jewish legend says that pomegranates contain 613 seeds, the same number as the Torah commandments. The pomegranate symbol is found throughout our campus from the mezzuzot on our doors to the pomegranate color on some of our buildings. 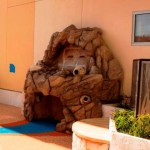 Water Cave: An oasis is known for being a haven of water in an otherwise dry landscape. Californians are, unfortunately, no strangers to water shortages so this cave was designed to conserve water. When little ones crawl inside the cave, they see water cascading on the plexiglass panel above their heads.

Giant Pottery and Archaeo-Climber: Jewish civilization stretches back thousands of years, which means Israeli archaeologists often find artifacts from the past. The giant pottery and archaeo-climber were designed to capture the excitement of finding bits of our ancient heritage. 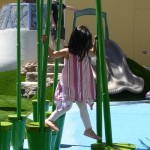 Climbable Papyrus Reeds: Reeds have a place in Jewish lore from the crossing of the Sea of Reeds to Moses’ cradle being found in the reeds by Pharaoh’s daughter.  Children are encouraged to explore the reeds, stepping from tree to tree (or sometimes climbing them!).

Beyond its hidden meanings, the most important thing about the Oasis is that it’s fun to play in and explore. But don’t take our word for it. Here are a few reviews from Opening Day.

J-Camper Sam: “I really like it because of the climbing and the slides. I also went through the tunnel.”

Madhu B., mother of a toddler and seven-year-old: “I was happy to see there is a section for small kids, too.”

Rosalind K: “It is fabulous! My great-grandchildren are having a fabulous time.”

The Oasis was made possible through contributions to our ongoing capital campaign and through generous support from the Koret Foundation.

Our dream of a bustling, joyful and multi-generational Jessica Lynn Saal Town Square is now fully realized as families, residents and first time visitors mingle, play and make new connections at our Oasis.  Not just on opening day but on every day since.