Welcome to The Breakfast Club

No matter how you look at it, The Breakfast Club defined a generation. When hearing this phrase, many people think of the classic 1985 John Hughes film about teenagers in high school. They each come from different cliques, standing in for different stereotypes, and must serve a day’s worth of detention on a Saturday. Audiences were intrigued by “a brain, an athlete, a basket case, a princess and a criminal” coming to terms with who they were as people. In the process, they learn that they have something essential in common.

Thirty years later, members of a different generation meet and form their own “breakfast club.” But it’s not the generation you might think, and everyone attends voluntarily to enjoy themselves, unlike in the film. However, participant Henry Burger notes, “We have a lot of people with varied experience who have different points of view. You see why people believe what they believe and how they came to form their opinions, which are very different and controversial. It’s really interesting.” The Tuesday morning Men’s Breakfast Club is a collection of mostly retired individuals ranging in age from their sixties to their nineties who meet at the Oshman Family JCC to have an open discussion. “It’s been a very open forum,” says Jerry Wagger, a retired physician and the group’s de facto moderator. “Topics are submitted by those present and occasionally we will have a focused agenda so that people can give some thought before.”

The genesis of the group was via the Community Tuesdays programming led by Michelle Rosengaus, OFJCC Adult Program Manager. Together with a volunteer, Michelle conducted focus groups to determine what men were looking for in social programming, which she discovered was a discussion group like the Breakfast Club. 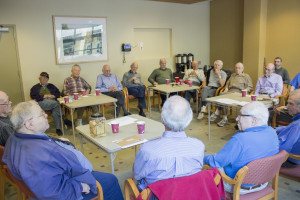 Initially, the group met in the cafe on campus (now Nourish: A Newish Jewish Cafe), but moved to room M-119 on the Saal Family Midrahov to accommodate the increased membership as well as provide a more private venue for discussion. It is free and open to the community at large and meets every week from 8:00 AM to 9:30 AM. “I have to get up early on Tuesday morning,” jokes a dedicated member of the group.

Topics range from health and romance to politics and poetry. Liao Weiping, a member of the group who writes poetry in both Chinese and English, describe his appreciation: “I am very glad to be here to meet friends. I have a good time.” Another member adds, “Every time that I come here, I go away with new information. That is the biggest reward—you learn something new.”

While the professions of the members include a retired automaker, geophysics professor, folk singer, civil engineer and diplomat, there are also a number of different physicians, including a retired ophthalmologist, gastroenterologist, internist and cardiologist. “Don’t get sick while you’re there,” warns Wagger, “because they’ll fight over who gets to take care of you.”

“Before I retired, I never used to communicate with men of such a broad spectrum,” says Jack Sklansky, a retired professor. “If I had known about it, I would have been even more eager to come here.” 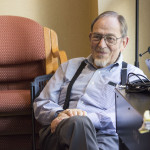 The group members, different as they may be, have found their harmony with one another, seamlessly passing from point to point. They acknowledge their differences but respect them. Mike Goldman states, “When you get up to talk, you don’t have to be right. I can attest to that.” He is interrupted by someone else: “And it will always be pointed out.”