JCC leadership planning the new campus (with dreidels on the table) circa 2007.

For longer than the biblical Israelites wandered in the desert, the Jewish Community Center of Palo Alto wandered in search of a home.

Although the Palo Alto JCC existed in some form since 1961, we didn’t have a permanent location until 2009. It was a miracle that the Taube Koret Campus for Jewish Life came together when and where it did; otherwise, the JCC of Palo Alto was at risk of becoming homeless. Up until 2001, all of the land that the JCC had considered for a permanent site was too expensive or too small. 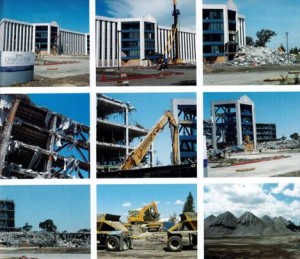 Demolition of the SUN Microsystems building in 2007.

The first miraculous thing to happen was that SUN Microsystems put its headquarters up for sale, the largest property to go on the market in Palo Alto in 20 years. Because of the dot-com bust, the cost to buy the land was more affordable than it would have been at the height of the bubble. Even then, it was still more than the community nonprofit could afford. Then the second miracle happened – the campus landed a partnership with BRIDGE Housing, who would buy back a portion of the land from to build Altaire.

Because of these factors, the committee was able to purchase the land.

But the actual cost to build the facility—a groundbreaking combination of senior housing, fitness center, preschool, cultural arts hall and classroom space—would be much more. 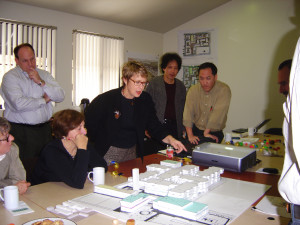 The fundraising campaign was a task that required singular vision and indefatigable spirit. This is what Carol Saal brought to the JCC of Palo Alto. At the time, the San Francisco-based Jewish Community Federation called it “the largest project the Bay Area Jewish community [had] ever undertaken.” The architecture of the campus was designed to resemble the narrow streets and cream-colored stones of Old Jerusalem. Architectural touches on the building subtly reference biblical symbols, facts and stories. The landscaping of the building and its village-like environment were all designed by an accomplished team of architects under Rob Steinberg.

The JCC successfully shepherded the campus application through the City of Palo Alto approvals process, organizing 18 public meetings and over 100 testimonials from community members. According to Shelley Hebert, former Executive Director for Campus Development of the future Oshman Family JCC, “Our goal was to be what I would describe as the gold standard of community process and community outreach 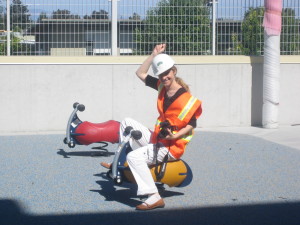 ” (Daily News 2007). And it was. The campus sailed through the approvals process and received permission to break ground.

Ten years later, the fitness programs, arts and culture events, multicultural family programs, senior workshops and Hebrew-language programming at the Oshman Family JCC touch thousands of lives each year. We are so grateful to all of our OFJCC members, our community members and the supporters who made this monumental campus a reality. The OFJCC is a community-supported nonprofit and without you, this would not have been possible. We are honored to celebrate the first ten years on the Taube Koret Campus for Jewish Life and we look forward to the next ten! Follow the story all year long at #10YearTuesdays.

Club J kids at the Oasis.