From Silicon Valley to Poland: Holocaust Education and the Jewish Future 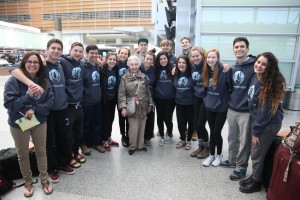 I returned a couple weeks ago from leading Shalhevet, a two-week journey through Poland and Israel to educate Bay Area high school juniors and seniors on “the history, heritage and future of the Jewish people.” A more intimate trip than March of the Living, which gathers thousands of teenagers from around the world, Shalhevet similarly featured visits to Auschwitz, Birkenau and Majdanek death camps, to learn about the horrors perpetrated there by the Nazis. It was without a doubt a powerful experience for our whole group.

Yet, as one of the two educational leaders this year, I have an admission to make: I am not, or at least have not been, a “Holocaust” kind of Jew. What could I mean by that? Simply this: the Shoah has never seemed to me a good reason, in and of itself, to be Jewish. I have never been convinced that the events of 1933 to 1945 constitute an attractive or meaningful foundation for a Jewish identity.

When I was living in London in my 20s, I set up a Moishe House in that city – a young adult Jewish community that my friends and I ran out of our own home – and I went onto work for the wider Moishe House organization, mentoring inspiring young Jewish leaders from around the world. In September last year I took up the challenge to innovate in the Jewish Community in Silicon Valley to create a positive Jewish identity for the 21st Century through my work at the Oshman Family JCC. Neither of these projects, Moishe House and my work in Palo Alto, require looking backwards to justify going on.

Here in the Bay Area, where start-ups may be born one day and disappear the next, where design-thinking is key and technology moves culture faster than any attempt to plan or understand, it would seem the perfect place to put this philosophy of Jewish expression into practice.

So what sense could I make of 14 teenagers (Generation Z, short attention spans, right?) signing up to go to Poland and Israel, choosing with clear intention to learn about the history of the Holocaust and what it might mean for them as Jews today and tomorrow?

The Shalhevet participants took their responsibility to learn from the past very seriously. At each historical site we visited in Poland, a different student presented his or her thoughts, reflections and ideas to the rest of the group. All of them took time to speak with AnneMarie, our accompanying survivor who escaped the Holocaust when she was hidden as a child in a Catholic monastery in Belgium, and who charmed and inspired every member of our group.

At the museum that is now part of Auschwitz, they looked up the names of relatives who perished in the Shoah, to understand how their lives and their families are connected.

They spoke about the need to oppose antisemitism and indeed all forms of racism, and how what they had learned would affect them and how they live their lives.
They also showed a capacity for understanding and holding great complexity – meeting Jewish young adults who live in Poland today and involve themselves in activities at the Krakow JCC; speaking to non-Jewish Polish teens about growing up in Poland and how they relate to Jews; and learning about 1000 years of Polish Jewish life at the new Museum of the History of Polish Jews, in Warsaw.

And then they took that understanding into a new context, as we moved onto Israel, traveling from the desert to Jerusalem and Tel Aviv, the foundations of the Jewish state. They went to Yad Vashem and held a ceremony for AnneMarie’s rescuer, who is commemorated there.

So now we are back in the Bay and I have time to reflect, what are my views on Holocaust education, bearing witness, and its significance for Jewish life and identity today?

It is clear to me that it is not necessary to base the whole of a Jewish identity on the Shoah, or give up belief in a progressive, creative Jewish life, in order to be able to learn about and from the past, and to remember.

Before the Shoah, Poland was the seat of Jewish innovation. There is Jewish innovation there today, in its tiny community, on a much smaller scale. These are important complexities to hold, as we move forwards into our uncertain, but exciting, Jewish future.

I am left with a sense of pride in Shalhevet – in the spirit and application of its participants – and hope for where we are going.

Joel was the Oshman Family JCC’s Director of Jewish Innovation. It was his job to infuse programs with Jewish values and content while helping create new forms of Jewish expression. Originally from London, UK, he doubles as an actor, director, and theatre-maker. Joel's other passions include Burning Man, Tottenham Hotspur Football Club, and Scrabble.