Come Sing with Me

The first time my synagogue put on a Purim play, the theme was rock ‘n’ roll. King Achashverosh was dressed like Elvis Presley. All I could think was, “Why am I not on that stage?”

I’m not an actor by any stretch of the imagination and I can’t carry a tune. But I don’t let any of that stop me from dancing like no one is watching and singing like no one is listening – much to the chagrin of my kids! But at the end of that show, even they asked me why I wasn’t in the play.

The following year the synagogue announced when they were looking for performers for the next Purimspiel: The Megillah According to the Beatles. I played Sir Paul (my favorite Beatle). We opened with ‘We’re Rabbi Pepper’s lonely hearts club band…’ and the kids sang ‘We all pray in a yellow synagogue.’

The day after the performance, I was exhausted and had no voice left. But boy, did I have fun! 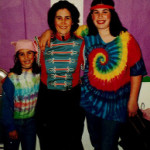 Over the next 15 years, I participated in every Purimspiel at the temple. Themes ran the gamut from the Beach Boys to Motown to the Jersey Boys, Chicago and Hair. I was always part of the women’s chorus and also played Haman, Haman’s wife, Esther’s ‘Bubbie’ and even Esther.

Since the ages of the performers ranged from 6–76, I met lots of people who I would not have met otherwise. And most of all, I had fun!

Sadly, my synagogue stopped putting on these very special Purimspiels about two years ago and I’ve missed them. So I was especially happy to see that there will be a Prince of Egypt Community Choir – the OFJCC is partnering with TheatreWorks for a one-time event during their upcoming production of The Prince of Egypt.

Kids (ages 7 and up), teens and adults will participate in a community choir and perform musical numbers from The Prince of Egypt in a unique, one-time festive concert presentation. Ten rehearsals will take place at the OFJCC between August 22 and October 22, culminating in a performance on the main stage at the Mountain View Center for the Performing Arts on Monday, October 23.

Come join me. Sing your heart out, meet your community and have fun!

Amy Shulman is the Web Services Manager at the Oshman Family JCC. An empty nester, she lives with her cats Tuna & Mya. She loves traveling, paint nights, dancing and listening to music. She also loves her job, but not her commute.