Another View on Leadership

In June, our Chief Operating Officer and Executive Vice President Sally Flinchbaugh was able to travel to Israel as a hands-on learning component of the Mandel Executive Leadership Program. The 18-month program empowers leaders of Jewish nonprofits to sharpen their vision of Jewish communal life and expand their leadership skills. Sally and her cohort had the opportunity to meet with members of the Mandel Program for Social Leadership in the North, including leaders from the Bedouin communities there. They were welcomed into a Bedouin home, which made her feel at home even among total strangers. Sally notes that the communal Israel experience “helped me to understand the perspective of the Israelis in the Bay Area community in terms of the cultural context they come from.”  Kol hakavod to Sally for her communal leadership which helps the OFJCC serve as a home away from home and a place to come together for so many!

We joined the Mandel Program for Social Leadership in the North for a joint learning day in the northern part of Israel. The aim of the trip was to give the fellows insight into the diversity of Israeli society. Seeing a Bedouin community is an important part of understanding that diversity. For small group visits to participants’ home communities in the north, Roxanne Cohen and I went off with Merry Kaabiya, a Bedouin teacher and pedagogical coordinator as well as a local coordinator for the Ministry of Education. We were also joined by Elan Nevo, a writer, journalist and disability counselor at Yahad BaGalil who teaches at the Tal Hermon Yeshiva high school, a framework for youth who have dropped out of the Haredi education system. 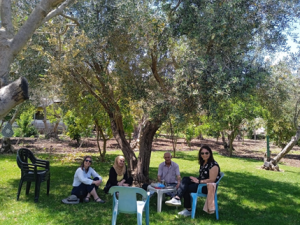 drove the three of us to her village, Kaabiya, to show us around and introduce us to her family. We were taking a walk along a recently built promenade when we happened upon a beautiful garden. As we were admiring the roses, an older couple sitting in the garden invited us in for our first cup of coffee. The man had planted most everything himself and had a variety of fruit trees, vegetables and flowers growing. It was quite impressive. 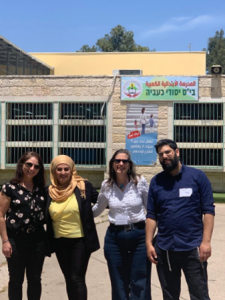 Our next stop was at the school where Merry teaches when she isn’t in the Mandel program, a year-long academic commitment. The vibrant elementary school was active, welcoming and well-equipped. They host a group of volunteers from the Jewish Agency every year from around the world to work in their English program, which is the creation of one of Merry’s colleagues. The children were buzzing with excitement to be speaking English and experiencing people outside of their community. We went into the principal’s office to learn more and take our second cup of coffee.

As we left the school, we drove through a community which was made up of three villages. This is where Merry grew up and her family has been since the 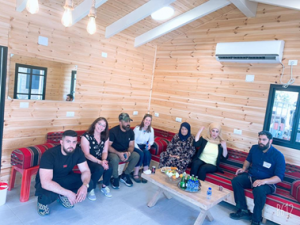 1930s when the Bedouin community bought the land. When we made it to her mother’s home—situated next to the homes of her three brothers and their families—we were ushered into a newly built free-standing living room with incense wafting and beautiful views of the area. We learned that her mother had lost her husband at a young age, which meant that she was responsible for caring for her family by herself. It was clear that she succeeded in being a strong figure in everyone’s lives and now the children.

Our last stop before heading back to meet with the rest of the group was Merry’s home. There we met four of her five children, her husband a 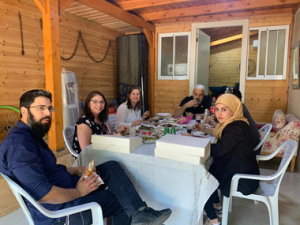 nd her granddaughter. We enjoyed a great meal of pita, hummus, salads, pickles and some delicious dolma type of food. The generosity of this total stranger sharing her home, her family and her community with us so graciously was extraordinary. We learned her story, her family’s story, including that of her 15-year-old son who wants to be a fashion designer. To be with her and Elad, a religious man who was equally as open to us and to Merry and her family, made for an incredibly special day. And of course, we didn’t leave the house without a cup of coffee!

Sally has been the Chief Operating Officer and Executive Vice President at the Oshman Family JCC since 2014. Prior to coming to Palo Alto, she was the Executive Director of the JCC of the East Bay. She has served as Executive Director of JustAct (formerly the Overseas Development Network), Community Development Program Manager for the American Refugee Committee in Uganda and the Volunteer Coordinator for Rainforest Action Network in San Francisco. Earlier, she worked in marketing at Clif Bar, Inc. Sally earned an MBA from the Anderson School at UCLA and an MA in Anthropology and her BA in Human Biology from Stanford University. Sally and her husband have three children and live in Palo Alto.