Yuval’s Six Tips for Your Own Neighborhood Musical Production

Yuval (sixth from left, in burgundy hat) was the youngest cast member in the OFJCC production of Disney's Aladdin JR.

Introducing our youngest blogger! With the support and encouragement of his parents, Yuval was able to pursue his musical theatre passion and shine in the OFJCC School for the Arts production of Aladdin as the youngest performer in the troupe.

Since then, the eight-year-old has co-produced, co-directed and acted in his own neighborhood street theatre production.  In his charming, reflective style, Yuval generously offers some words of wisdom for anyone who’d like to start their own project.

This article was adapted from an interview with and an article written by Yuval F.

After that, I set up my own street theatre for different plays, with six kids and over 25 audience members. If you’re thinking about starting your own street theatre, you will need technology like a wireless microphone, speaker, electricity and extension cables. My grandma made a super special curtain for me that is from Israel. We needed volunteers and backstage people to help with decorations and moving stuff. We needed chairs for the audience and props for the play.

We asked if one of our neighbors could help us with the music, and sometimes we used my piano keyboard to make trumpet noises. We performed on my family’s driveway and we thought it was a good stage. We used my costumes or shirts to look like characters and sometimes we used a little bit of make-up to look even more like real story characters. Here are my six tips to creating a street theatre in your own neighborhood. 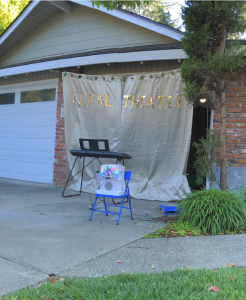 “We used my driveway to be a stage.” -Yuval

[After performing in the OFJCC’s School for the Arts production of Aladdin,] I started thinking about starting a theatre with all my neighbors and friends.

My friend introduced me to some of her friends and I became friends with them. I told them about my idea for street theatre and they decided to perform.

You need enough people to perform, so it won’t be you and your siblings as the only people who perform. We rewrote the story of different plays and we did votes.

You have to have time to rest and not rehearse all day long. We rehearsed four times a day for one month because we take it seriously. Mostly, we were always together. It’s important to rest because, when you rehearse a lot, you can get tired.

We used my driveway to be a stage. It doesn’t have to be wood, all flat and smooth. It was cement, not that flat, a little bumpy, but it worked.

When we were trying out two different tables to use [as a prop], one of them was not safe and we picked the other one. Don’t ever pick unsafe choices. If there’s a situation where you don’t know what to do, you want to make the safe choice.

I think next time, I’ll do invitations for people, so people all over the street could come and watch. I hope you will come knocking on my door this summer!